Suction cups are gadgets that do wonderful work of organizing the physical objects. A person can find so many uses of this device. Let’s take the example of cards of bunch of photographs that we need to arrange on walls. Mounting all those photographs would mean to assign one separate space to each of the picture. Such arrangement is enough to deprive us from enough space. Here, devices like suction cups come to rescue. We should arrange all those pictures; place them on wall and the place a suction cup on it. The magical device would create a pressure in a way that pictures would remain glued together.

But a suction cup is not merely a way of holding different pieces and objects together. There is much more that this tiny device can do.

Let’s have a look at why we need a suction cup.

What a suction cup is all about?

Suction cup is a transparent device which made up of glass or polymers. The most common material is the PVC. The circular gadget is designed in a way that it can make the air and other fluids to move through it. Further the material in manufacturing is used in a way that it offers maximum flexibility, so that gadget is able of restoring back its original position.

Suction cup does nothing but create a vacuum. Its actual purpose is maintaining enough air pressure so that it remains stuck with the object, let’s say wall.

Transparent suction devices have myriad of uses. Their most common use in medical is to perform the tasks such as cupping. During deliveries of babies, these suction devices often help to take the baby out from uterus. These complex functions don’t limit the use for general audience.

Suction cups that have side holes, can be used to attach hooks. Such arrangements make users to arrange as many objects as the device can handle. For example, many women use suction cups in their kitchens. They just attach the devices to the walls and pass a hook through it. Later, they use different objects to hang and arrange them in different order. An average suction cup can withstand weight of up to 5 KG. Ability to withstand weight differs according to circumference. A medium sized suction cup can have up to 46mm diameter.

Getting best out of the suction cup

Suction cups are small devices and don’t cost too much. It is better to keep different types of them to get the best use. One can also choose to have more target oriented suction cups. The simplest form is one that has hole on upper cylinder and a small hooker on the circumference. Such basic devices are transparent and mostly made up of vinyl.

It is better to use the suction cups when they are clean from inside. Further, attaching surfaces also has to be even, smooth and dirt free. Suction cups don’t perform accurately if these necessary conditions are not met. 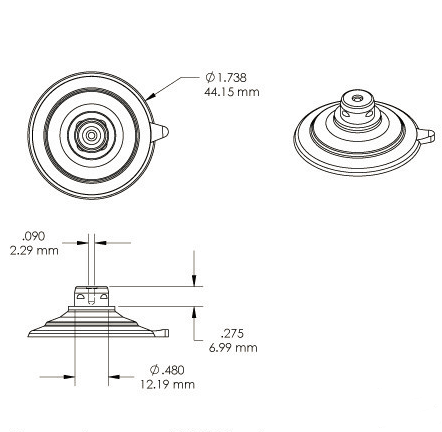